On the morning of June 7th, 2018 my buddy, Monte, and I decided to check out Ophir Pass to see if all of the winter snow had melted. We were headed south out of Ouray, CO working our way up to Red Mountain Pass. There was no need to be in a hurry, as the area is incredibly beautiful with the surrounding mountain peaks reaching over 14,000 feet in elevation. We had just rounded a slight bend in the road when I spotted a deer standing on the shoulder of the road. Instinct took over and I laid on the brakes hard! Within a half a second, I was right next to the deer, which decided to run parallel to me. It made a quick head-bob to the right like it was going to turn away, but then made a hard-left turn directly into my path. With a solid THUD, I broadsided it with my 2014 BMW R 1200 GS. The deer instantly disappeared. For a very moment, I thought it had bounced off my bike and away from me. As quickly as that thought came into my head, I realized that it had not bounced off but had gone down under my front wheel. This caused the front wheel to jerk hard to the left, taking me and the bike down to the pavement. 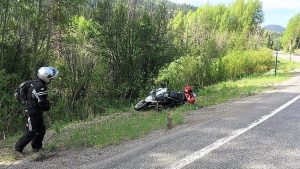 It is strangely funny that when these types of events occur, time seems to slow way down even though the actual experience is happening very fast! I don't remember initially hitting the pavement, but do remember sliding across the pavement thinking "Thank goodness I didn't hit my head!", only to feel my body flip over and hear the 'CRACK' of my helmet hitting the pavement.

When I finally came to a stop on the opposite side of the road along the shoulder, I looked up and watched as my bike, about 15 feet away, came to a skidding stop about a foot away from going over the edge of a very steep embankment. The deer was still in the middle of the road. Both of its rear legs were broken as well as a huge gash in its side. It managed to stumble between the bike and me, fall down the steep embankment, laying in the bushes in pain. Monte and I usually both carry a firearm, but for some reason, neither one had brought ours that day, so there was no way to put the deer out of its misery.

Assessing my injuries, the only pain I felt was in my hand. Either from the initial contact of the bike hitting the deer or crashing down onto the pavement, I had somehow sprained the thumb and index finger of my right hand. My Klim gear as well as my Shoei helmet had taken the brunt of hitting the pavement at 45 mph, leaving me to ride another day.

My bike was considered a total loss and my gear was in tatters, but I was not only alive but had come out almost completely unscathed!