I suppose with all the recent fervor over the Passbagger contest and the few members that have achieved the 200 pass level, it seems appropriate that I should add my spin and what the quest has done for (or to) me. Pass pictures were just another collection to me, akin to collecting pictures of state line signs, (all 50) or the little stamps you put in your National Parks “passport” book every time you visit one of our wonderful National Parks or monuments. (Randy B. got me started on that. A true motorcycle bro.)

I started collecting pass sign pics about 1992. I had purchased an '89 Transalp with the intent of exploring Colorado’s ghost towns and abandoned rail grades, as I had been interested in that sort of thing ever since I was a young man, oh about 1923, I think it was. Adding the pass pictures seemed like a novel sideline to the exploring I was already doing and was taking me to places I otherwise might not go. 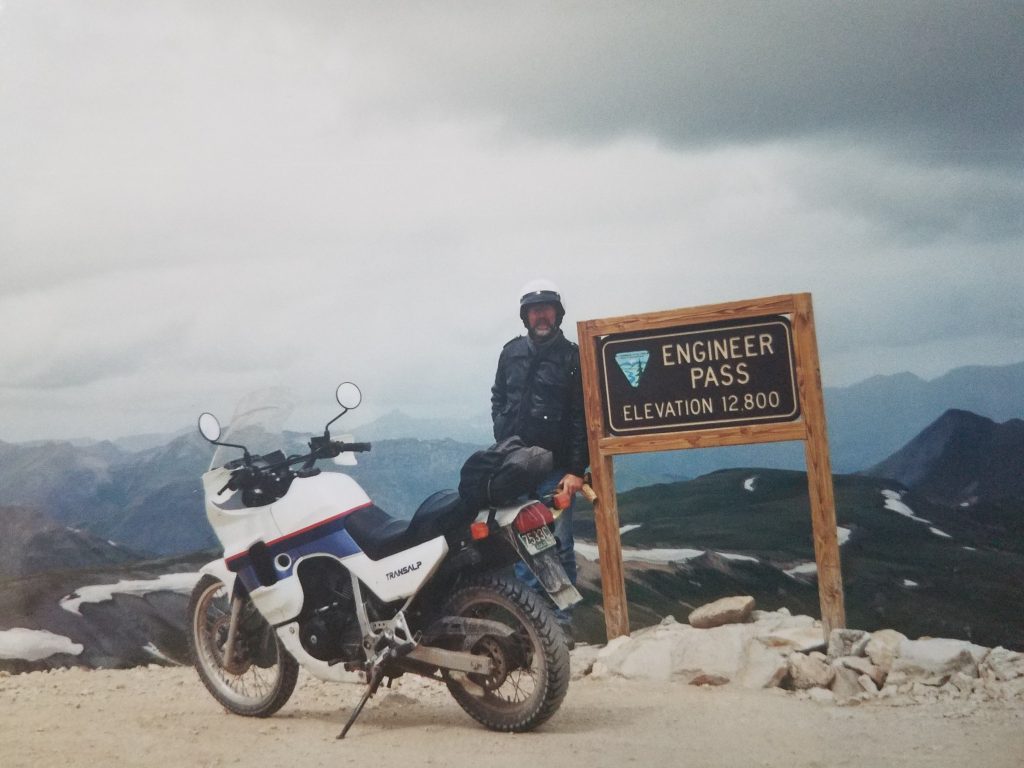 When I showed up at the Beemer club in '04, I already had over 50 pass pictures for Brad Bolton’s Passbagger 50 contest and was the second in the club to reach this level. Then it got weird, so I will expand.

Most of Colorado’s passes have commercial reasons for being there, usually related to our mining industry and to provide access to the small towns that were spawned by the search for minerals and wealth, sometimes no more than a tent town. Railroad passes are fairly easy to ride on as railroad grades usually have less than a 5% grade and must circumnavigate major obstacles. Some examples of this are Marshall, Boreas, Baxter, Rollins, and parts of Hagerman. Many paved roads follow the rail as well, like Kenosha, Poncha, Fremont, Tennessee, Lizard Head, Trout Creek, and a few more.

Hagerman is one of the most interesting. If you hike in, you will come across the site of Colorado’s longest trestle at 1100 ft. in length and 84 ft. high. Also, there is the ghost of Douglass City and at the end of the hike is the Hagerman Tunnel, 2161 ft. in length. And, at 11,528 ft. in altitude, it was the highest railway tunnel on the planet. Only used for three years it was replaced by the Carlton Tunnel at a lower level. Some of Aurora’s water now comes through the lower tunnel.

Most passes were wagon roads however and the list is too long to mention here. Some passes are just downright hairy, like Pearl, Taylor, Hayden, Black Bear, and Williams, and need a real dirt bike to conquer these.

In the early days of Pearl Pass, one would have to disassemble their wagon and lower it down in pieces. I dislocated a toe on Taylor Pass riding a KLR, it’s no picnic either. The highest road pass in North America is Argentine at 13,205 ft. outside of Georgetown. You can still ride there from the east but the west side is just for hiking.

Passes sometimes have personalities attached to them. For example, Otto Mears built and operated many toll passes around the state, like Rollins and Marshall before they were sold to the railroads. Father Dyer (The snowshoe itinerant) used to carry the mail over Mosquito Pass to Leadville, Can you imagine hauling mail at 13,185 ft, in snowshoes in the winter! They don’t build ‘em that tough anymore.

What I’m attempting to impart to you, is there is a lot more to this than the number of passes you bag. The quest sends you all over the state where you otherwise would never venture. There is a multitude of extra items to see and do as you continue with your collection if one is so inclined.

As I was headed south after bagging Columbine Pass by Steamboat Springs, my 203rd pass, I was thinking this is an absolutely stunning valley with what might be the largest stand of aspen trees in the whole state on a perfect September morning aboard my old Transalp. If I hadn’t been up here to bag this pass I might have missed it. Gee, even the cows look good.

I began to get a little emotional from the immediate beauty and the extensive memories that began to flow over me like I was watching a video. I thought about all the good times and cool things I had seen, done, and learned in twenty years of dual sport riding and bagging passes - the awesome scenery, the mud, beautiful forests, surly bulls in the road, great weather, boulder fields, the driving hail, friendly people, water hazards, fields of wildflowers when I was the only one there, the challenges, the danger, the tough and the easy, the history - and I loved every last second of it. All this from an unusual contest started by Brad Bolton back in about '02.

So this is what comes of ideas. The next thing you know, you are out there armed with this excuse to go riding. And you’re having a great time, seeing stuff you wouldn’t have seen, getting an education and thinking about all this.

Thank Brad for all this. I doubt he knows what he started. And to think we might have missed it.