Souvenir, a French word meaning memento or memory. Usually, some kind of token or bobble to remind us of a moment in our lives. A photograph however is most likely the most efficient and cost-effective souvenir you can have, a moment frozen in time and you don’t have to dust it or box it up and move it much. And there is as well, much credence to the phrase “a picture tells a thousand words.” For example, I found the picture included while sorting through some boxes the other day and thought it would make an interesting story. 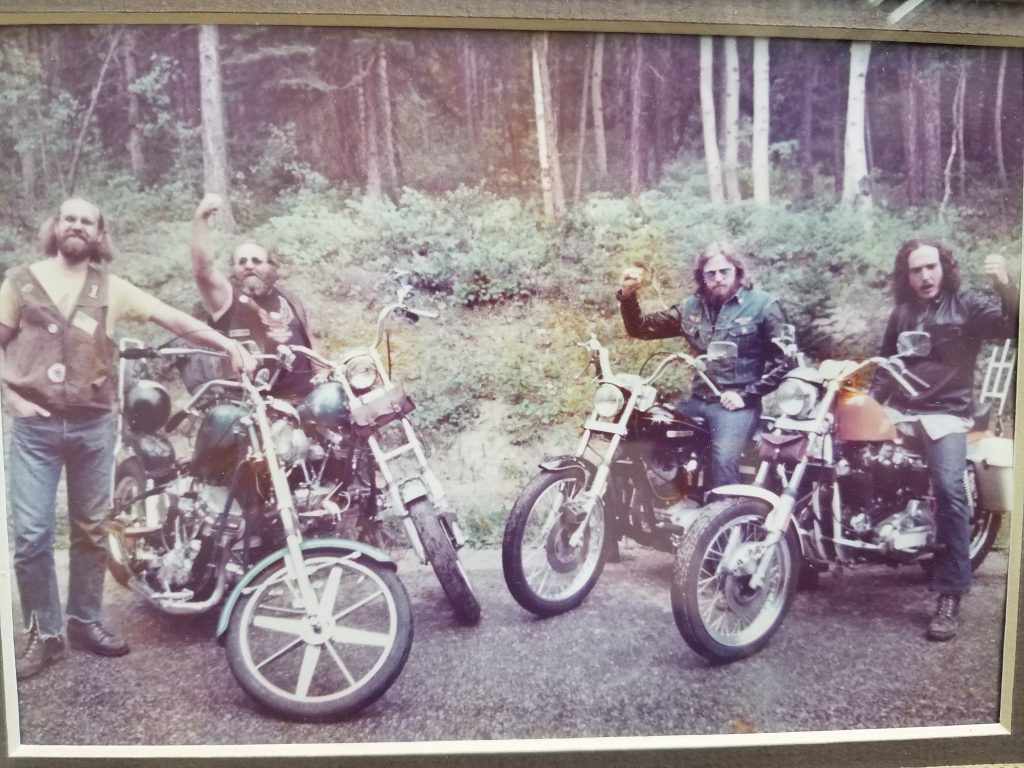 The year was 1977 and we were tasked to participate in a film on occupational hazards. Our segment was on hearing protection. We would wear remote mics and ride around a corner on a road west of Bergen Park, where a guy with a camera standing in the road would ask us if the loud bikes bothered our hearing. We would cup our ears and respond “huh.”After three times at this, my old man yelled,” no man, you get used to it.” Suggesting none of us could hear anymore.

We were paid 100 bucks each, a free lunch, got this picture taken, and it added to our fifteen minutes of fame, Never got our big break into biker movies though.

But let’s dissect the picture for details. The guy on the far right is Pete Saylor. He was a mechanic at the Harley shop that was next to the river just off Bowles and Santa Fe. There were only two Harley shops back then, both owned by the same guy, his name was Roger as I recall. This particular shop was purchased later by Vinny Terranova and morphed into Mile High Harley, with great success. The building next to the river was razed many years ago and a restaurant now resides in that location.

Pete is on an “Iron Head” Sportster, about 1975, it was rumored to have a heavily breathed on engine, but he’d never turn it on, so none of us knew how it really ran, notice the white frame. Only Pete had one.

Next to him is Buck, on a late 70s Superglide. He worked the sales counter at the shop on Colfax. That shop was the first Harley shop in Denver. Later, word had it Buck embezzled a heap of money and ran off with the secretary, sort of a classic American story. We never saw him again. Notice the front “Centurion” fenders on both bikes, they were all the rage at the time.

Second, from the left is my old man. The infamous “Big George.” He’s aboard a 71 Superglide. This was the first year of the model and featured the “boat tail seat fairing,” unique also in the respect you could pack two passengers on it, or a passenger and a bag of groceries. I saw him do this on numerous occasions. Usually two small women, “gidgets,” we called em, short for girl midgets. He put mega miles on that bike and owned it until he checked out on Valentine's Day of 2000.

Last is me, skinny and just 22, didn’t have hair then either. My bike was a '57 Panhead, the only year Pans had a “straight-leg” rigid frame, and I think it was the only pan around that didn’t leak oil. Notice the torn right pants leg. We had to kick start 'em then and I was always hooking my pants leg on the passenger pegs when I started it. I had purchased this bike from a “bro” for two grand and redid it yearly. It had no front brake, a really flimsy 35mm fork, a mechanical drum brake in the rear, and of course no rear suspension. I believe I knew where every pothole in town was.

With pullback handlebars and cool shotgun pipes from the exhaust shop with no mufflers, I was one of “those guys.” It’s a wonder I’m alive after riding a bike like that. This one got smashed when I rode it into the passenger door of an El Camino behind Griff's Burger Bar on Broadway on March 8th of 1980 and was sold for parts. It was my third bike.

Much has changed since then, and the road has been scenic and amusing, there are many other tales that branch off of this “souvenir” much like spokes leave the hub of a wheel, but we’ll leave those stories for other days.

Oh, did I mention that I don’t have to dust it? Have fun out there.